Last week I randomly bumped into an old friend of mine from culinary school and we started catching up on the past few years. He told me he had quit the food industry after traveling around New England for a bit, but wouldn’t go into further detail. After interrogating him as if he were a suspect rather than a friend—and with the help of some cocktails— he finally told me. He loved the kitchen but he wasn’t expecting to start at a lower position and have to work his way to the top. Plus he didn’t like getting yelled at. He’s a talented kid, but he was expecting to go straight from a two year program (shout out to all the homies at SMCC culinary program in South Portland) to running a kitchen on his first day. Nice dream but it just isn’t happening.

His story to me has become sort of a trend in the past few years. Personally, I feel as though kids nowadays want to jump right into the captain’s chair without paying their dues and or going through the trenches. So, I want to throw a few things out there that I’ve learned over years (and am still learning every single day in the kitchen) and hopefully it will help.

Unless you’re a prodigy, you’re not going to start out at Sous Chef or Chef de Cuisine. You’re going to start out at garde manger. This is where you learn fundamentals, organization, some flavor profiles; and you keep your head down and do work. Take pride in every dish you put up. Show conviction. If you think you are fast at prep work, go faster. Always set a higher standard for yourself. Eventually you will move up the ladder.

You’re always going to make a mistake—mistakes happen. What’s important is how quickly you can react to that mistake and find the best logical solution to fix it. Never be afraid or too proud to ask for help. It took me a long time to realize that. In the kitchen you work as a team, and if you succeed, the whole team succeeds. Never take it personally when a chef yells at you—most of the time there’s a good reason. I love my team in the kitchen. They are my backbone all day, every day. They know that sometimes in the heat of the moment that things don’t go as planned and they hear it but they know it isn’t personal. Keep your head down, do work and get through it. You will continue to move up the ladder.

The people I’ve met and worked with who started at the bottom and steadily worked their way up have ultimately found success in their career as a cook or a chef. And it’s really rewarding to see and to hear about it. You work hard, you learn, and you apply it, and great things will happen. You will learn so much by just taking the time and putting in the effort and paying your dues—instead of quitting all because you want to jump into a position you’re not ready for. It’s such a waste of all the talent and time that you’ve given. I know I’m still learning. Whether I have a good day or a bad day, I learn new things every day at work. I’m still growing and can only continue to do so professionally and personally. Don’t quit and give up. Do work. 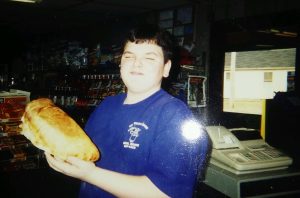 Young Josh getting his start in the kitchen